Home Travel How to Spend 4 Days in New Orleans

How to Spend 4 Days in New Orleans

New Orleans. NOLA. The Big Easy. A city by many names, all conjuring the jovial “Laissez les bons temps rouler!” (“Let the good times roll!”) attitude towards life the city is famous for. New Orleans is filled with scrumptious French-inspired Creole and Cajun food, live jazz music, street performers, and an appreciation for all the temptations of life. Life is lived well here in the Big Easy.

I first visited in 2006 on a road trip across the country. It was post-Hurricane Katrina and the city was in bad shape – buildings still laid vacant, trash was strewn on the streets, and the city felt like a ghost town. Nonetheless, I was still impressed by the positive attitude the local residents maintained. Returning this year for Mardi Gras, I noticed that the city had changed. Not only had it cleaned itself up, but many new areas of the city seemed to be bursting with life as well.

After two lengthy visits, countless hours walking around, tours, listening to all the jazz music this swing-dance lover could find, and eating as much crawfish as possible, I’ve compiled a non-definitive guide to exploring New Orleans:

Use this first day to walk around New Orleans, taking in its three main neighborhoods along the Mississippi River: 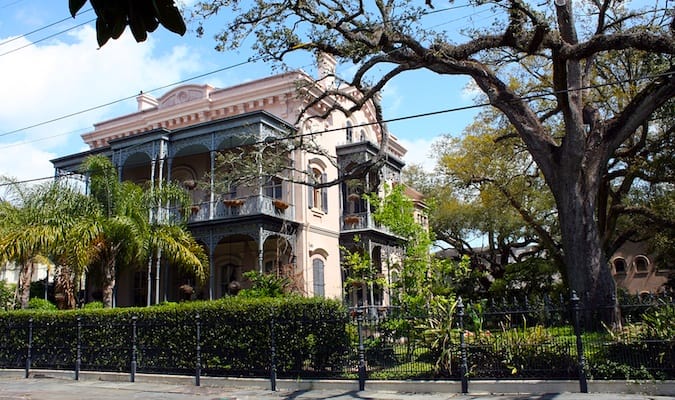 My favorite area of New Orleans, the Garden District is home to ornate, large, historic mansions as well as some of the city’s best and trendiest restaurants and bars. Quiet and more relaxed than the French Quarter, it was developed in 1832 for the newly-rich Americans who settled in the city. The French Creoles wanted the Americans out of the French Quarter and, through some clever marketing about how the nouveau riche could build huge homes, convinced them to move here. Spend a few hours wandering the streets, seeing the old mansions, and visiting famous cemeteries like Lafayette Cemetery #1 in the central part of the district.

The Riverfront/Warehouse District
Right between the Garden District and the French Quarter, this area has seen an incredible revitalization over the last few years as old empty warehouses have been turned into shops, art galleries, and trendy restaurants. Meander through the cobblestone streets, check out some art, and walk along the Mississippi before turning in to the French Quarter. 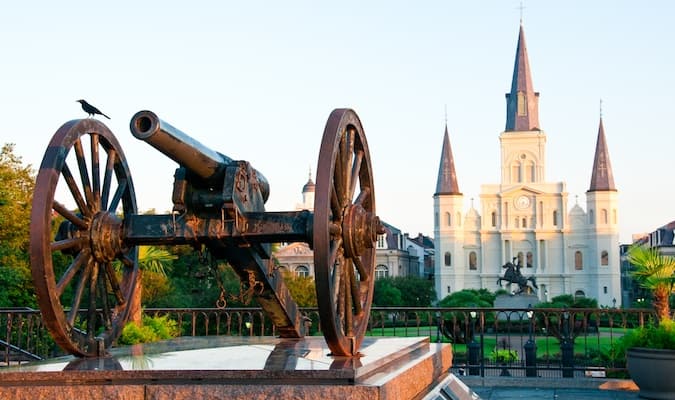 End the day at the famous French Quarter, where you can see the old style 18th century French homes with wrought-iron balconies. The area was settled by the French (hence the name) in 1718. The district is now a haven for drinkers on Bourbon Street, antique shoppers on Royal Street, and foodies seeking some of the best Cajun food in the city. Here you’ll find Jackson Square, St. Louis Cathedral, beautiful homes, and bars blaring top-notch jazz music. The visitor center offers a detailed self-guided tour map.

I suggest taking the Free Tours by Foot walking tours. They offer a ton of walking tours throughout the city. You’ll learn about the history of each neighborhood so you have an idea of what you’re looking at when you wander on your own! Try to get Denver for the Garden District tour. He’s one of the most knowledgeable tour guides I’ve ever come across. 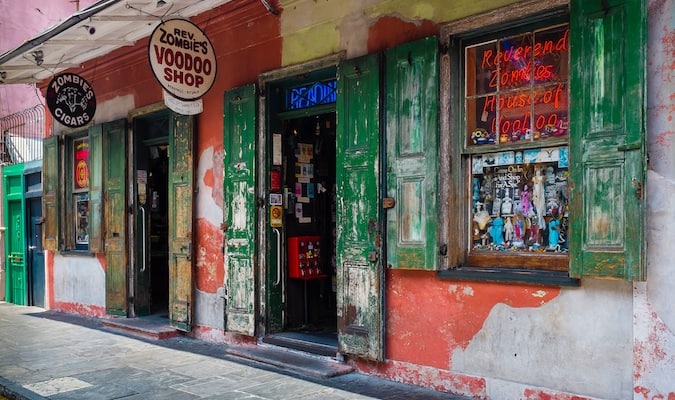 New Orleans Voodoo is a set of underground religious practices that came out of the African religious traditions of the slaves brought to the city. Voodoo and the occult are synonymous with New Orleans. From stories of ghosts and vampires to Marie Laveau (the city’s historic and most famous voodoo practitioner), New Orleans has a certain creep factor. The tours take you through the French Quarter and its cemeteries and teach you about the voodoo past of the city. The Voodoo Bone Lady Haunted Tours is one of the best.

1850 House
Located next to Jackson Square, this house is run by the city and decorated like an antebellum home. During the period before the Civil War, slavery made white plantation owners very wealthy and they built elaborate homes to show off their good fortune. They were the townhouses of the past. 1850 House is an example of what many of these townhouses looked like before the American Civil War. 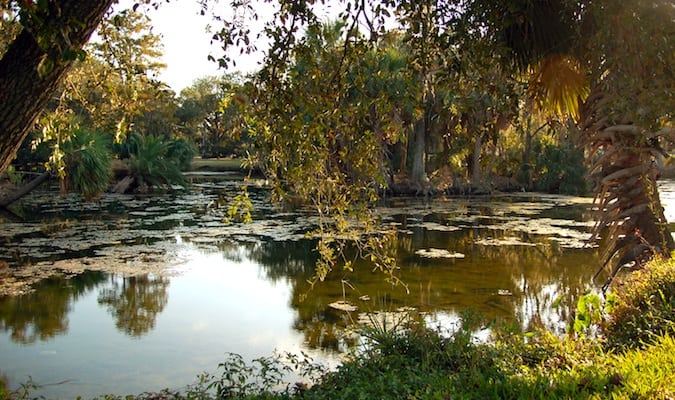 New Orleans is more than just cityscapes. The city also has two stunning parks, and I’d highly recommend spending an afternoon wandering around one of them. They offer ponds, oak trees, and quiet areas that can recharge your mind and spirit (and relax your feet after so much walking!)

Take a Ghost Tour
End the day with more creepiness and take a ghost tour of the city. I love ghost tours. Exploring the eerie side of cities is fascinating. What legends and myths does a city revolve around? What’s the dark side of a city’s past? Ghost tours delve into this stuff (whether you believe in ghosts or not!). New Orleans has many, many ghost stories that date back to the city’s founding and is classified as one of the most haunted cities in the country. The ghost tour offered by Haunted History Tours is one of the best.

Listen to Music on Frenchman 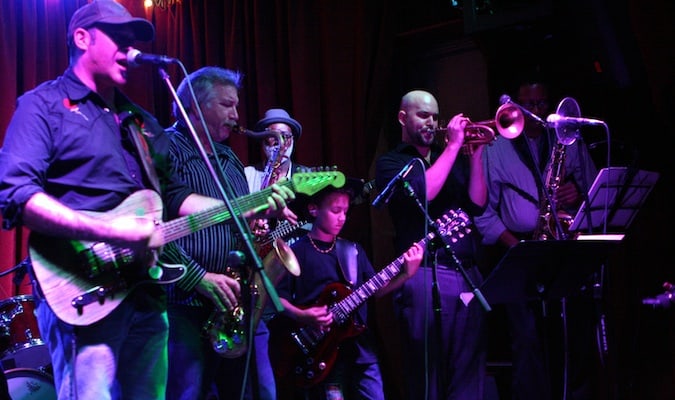 From street bands to jazz halls, New Orleans has music in its DNA. End each day by listening to New Orleans’ incredible music scene on Frenchman Street, which is famous for its collection of jazz bars, including my favorite, The Spotted Cat.

Today, escape the city and see some of the surrounding country: 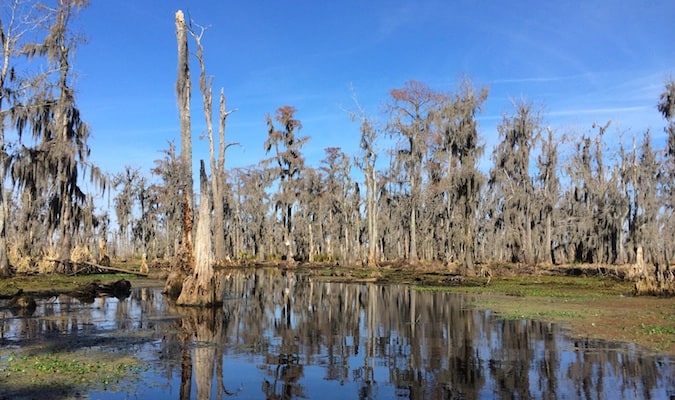 Take a kayak tour around the bayou and explore the swamps filled with alligators and Spanish moss-covered trees. The bayou provided early settlers with trees for homes, fish for eating, and waterways for commerce and is still part of the lifeblood of the region. Spend your morning in this beautiful and relaxing area by getting back to nature. 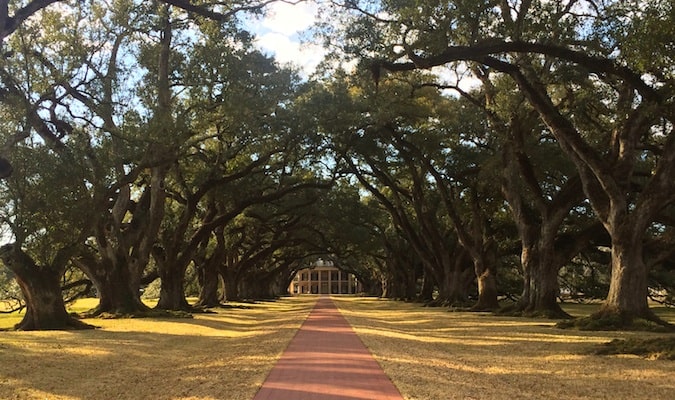 After your bayou visit, head over to the famous Oak Alley plantation home. Twenty-eight oak trees line a walkway leading to an old home right on the Mississippi River. The home’s interior is not that awe-inspiring (but the exterior is) and the guided tour leaves you with a lot of questions, so just tour the grounds, which are well worth the drive from the city with their gardens, large oak trees, and detailed exhibit on slave life. Try to either get here early or stay late to avoid the day tours that come from New Orleans so you can take people-free pictures!

There are other plantations nearby that, while not as pretty on the exterior, have more beautiful interiors and better historical tours: 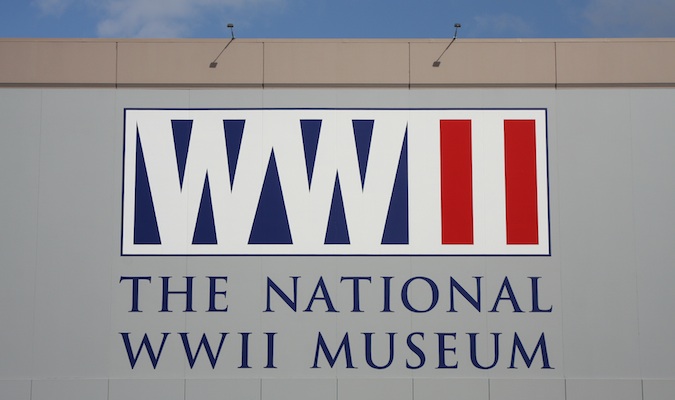 This is the largest museum dedicated to the war in the United States (and voted the 11th best museum in the world by TripAdvisor). I’d have to agree – its use of audio, video, artifacts, and personal stories tie the history of the war together in incredible detail. I spent over three hours there and still had more to see. Though admission is steeply priced at $21 USD, I highly recommend visiting. Many veterans from all sides of the conflict spend time here and you can listen to first-hand accounts of the war as well as see some of their pictures.

The Museum of the Confederacy
The Confederate Memorial Hall contains over 5,000 historical artifacts. I’m always intrigued by Civil War history museums, especially those in the South since the memory of “Northern aggression” still lives strong. This large museum paints a picture of Southern patriotism and the sense that they were fighting for honor. I found their absence of talking about slavery as a primary reason for fighting interesting. It’s always fascinating to learn how people frame their story.

Note: While I didn’t visit it, The Ogden Museum of Southern Art is supposed to be an exceptional art museum with a large collection.

New Orleans is filled with some of the best food in the United States and my visits here only scratched the surface. Out of all the places I ate, these five were my favorite:

New Orleans is a city with soul. It’s seen some hard times, but it lives on with a zest for life unmatched by most places. The energy, food, and music scene make New Orleans one of the most eclectic and vibrant cities in the United States.

The post How to Spend 4 Days in New Orleans appeared first on Nomadic Matt’s Travel Site.

Original Article: How to Spend 4 Days in New Orleans

Previous PostSeven Perfect Days in Belize Next PostThe Psychology of Blame: Another Animated Lesson That Can Make You a Better Person

The Future of Greener Air Travel